Stage lighting design is an important part of the stage performance art. In recent years, with the development of digital projection technology and the expansion of its field of art, stage lighting design in the form and content richer. Performance in the application of digital projection technology, the digital video processing, digital video projection and computer lights and other modules combined with digital lights, through the control device on the digital light within a variety of image material chooseion, stacking, cutting and other special effects processing, and then projection To any flat or three-dimensional receiver, can show a variety of video images. It to enhance the artistic effect of the show, to better express the theme of the show.
The biggest feature of the digital light is a multimedia server, you can easily operate through the light console thousands of effects options, so that the director, lighting design, choreography and other creative ideas and ideas in the digital device easy to achieve, greatly enriched the creation The means of expression and expression, choreography effect will be more vivid, image. Many creators believe that digital lights and traditional lighting, choreography effect closely with the completion of the performance of visual effects and theatrical theme of the deepening of the future stage lighting art is the only way. This paper combines the authors work practice, analysis of digital lights in several places in the design and application.
1 large indoor venues application
Large-scale indoor performance venues generally refers to more than 1,200 theater (theater), integrated studio and sports venues, and its characteristics: stage area, stage Taiwan wide, the stage performance space, dance production complex. In this kind of environment, the design of digital lights first to consider the same stage with the proclaimed props, such as the background sky, the stage front curtain, the stage furnishings props, etc., focusing on the overall performance of the stage lighting requirements and the division of the district.
In April 2009, Zhengzhou Song and Dance Theater according to Cao Zhi "Luo Shen Fu" hit the dance drama "cloud water Luo God" (see Figure 2) in the China National Grand Theater successfully performed, causing a sensation. The play uses three 20000 lm digital lights, more than 60 1200 W computer lights and more than 200 conventional lights, digital lights to move props on the stage "live" up. As the media described: "beautiful music in the ballet and moving dance and multimedia presented a variety of unique scenes, to the audience left a deep impression", "multimedia images in the dance show, the expression of the human emotions And the environment in which can be described as quite in place, fully demonstrates the tension of the drama. 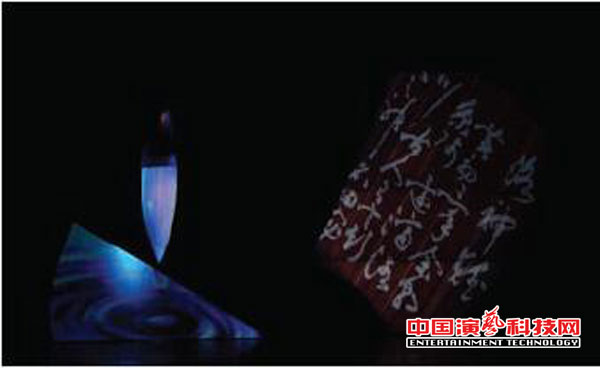 Figure 2 dance drama "cloud water Luo God": digital lights in the stage scenery on the aesthetic animation effect
There are many such cases in China, such as: 2009 Daqing Song and Dance Theater eco-dance drama "Heming Lake" (see Figure 3), 2009 sea scene real drama "blue Imagine", 2010 Guangzhou Ballet Ballet "snow "2010 is the sunshine I am a flower", the 2010 Great Hall of the performance of large-scale music and dance epic "revival of the road", the 2010 National Song Dance Troupe National Dance dance show "home song" "And so on, are a lot of use of digital lights, the application effect is very good.

Figure 3 dance drama "Heming Lake": floods on the stage reed, reed Fei Xu and other effects
2 indoor small and medium-sized venues application
Indoor small and medium-sized venues generally refers to the 300 ~ 1200 of the theater, integrated studio and multi-function hall, which is characterized by changes in the stage, choreography production is relatively simple. In such an environment, the design of digital lights to consider the stage as a whole illumination requirements, the division of the light area and the combination of props and props, such as the background sky, stage front curtain, stage props size. Zhangjiajie Grand Theater folk song and dance drama "Hymn Wuling" performance art reflects the Zhangjiajie geological changes, wonderful landscape scenery, as well as the ancient and mysterious minority culture. The show uses four DT7000 (6500lm) digital lights, seven LED display, more than 20 computer lights and more than 100 conventional lights. In the performance, with the digital light and the curtain to create the forest effect (see Figure 4), but also simulated the pool wave effect (see Figure 5) and rockery false water curtain and other effects, with a strong artistic shock. 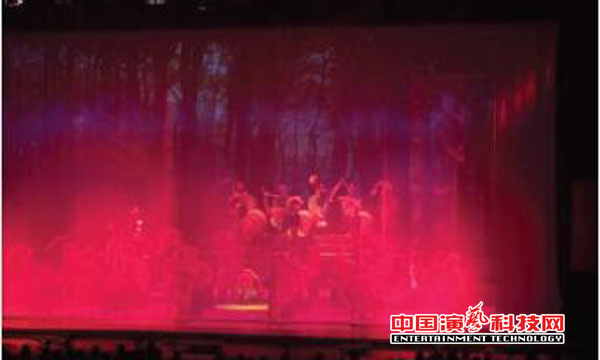 Figure 4 Dance "Hymn Wuling": digital lights in the front of the stage screen simulation of the original forest effect 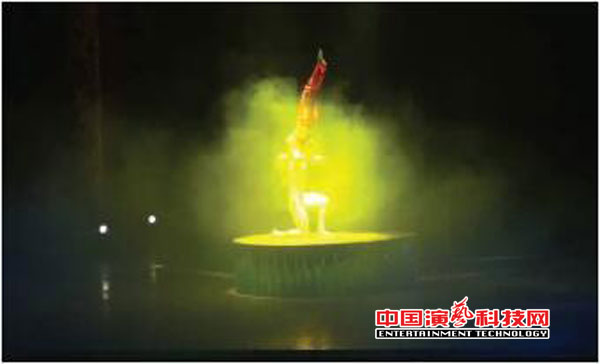 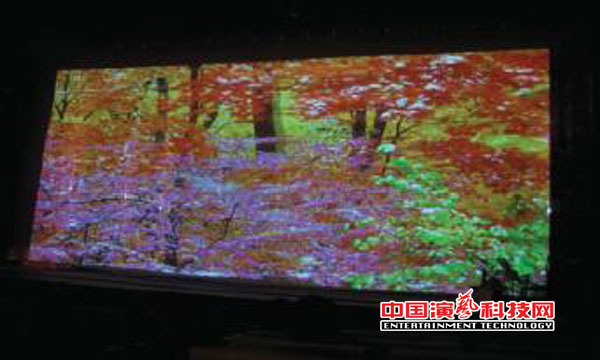 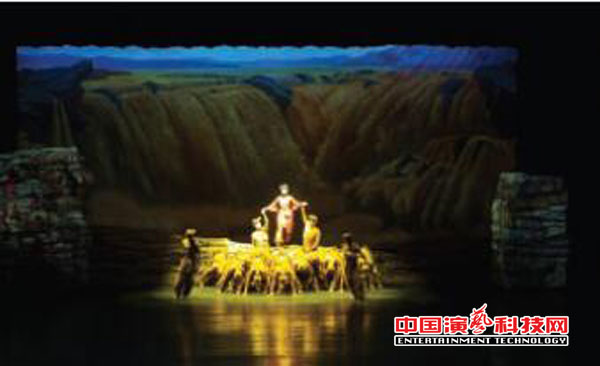 Figure 7 Musical "Ode to the Yellow River": digital lights in the stage curtain to create a waterfall flying effect
3 outdoor real performance applications
Outdoor real performance is a true mountain for the real stage of the show to show the local culture as the main content, by the performing arts, business together with the unique cultural performance model, is Chinas tourism industry to human tourism, cultural tourism transformation under the special product.
The real drama "Impression Putuo" is a landscape of natural scenery, Buddhist culture, artistic visual effects in one of the landscape real performance (see Figure 8, Figure 9). The show designed four 22000lm large digital lights and up to thousands of computer lights and LED lamps. (Figure 10) uses six sets of 20000lm digital lights; showcase the Chinese tea culture of the real drama "Impression Dahongpao" (Figure 11) the use of four sets of 20 000 lm digital lights; Water real style song and dance "Mengshan Yishui" use of four 22000lm digital lights. 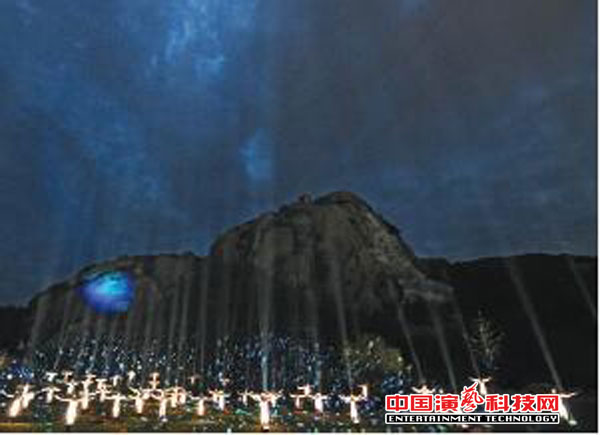 Figure 8 "Impression Putuo": digital lights in the performance of the venue to form a unique starry sky effect 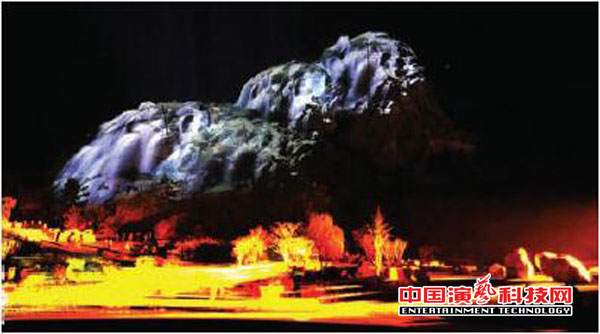 Figure 9 "Impression Putuo": digital lights in the rock and tree-based mountains on the formation of the magnificent waterfall flying effect 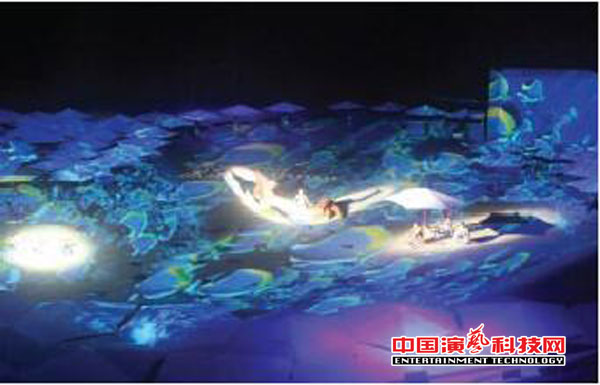 Figure 10 "Impression of Hainan Island": digital lights on the stage to form a submarine effect 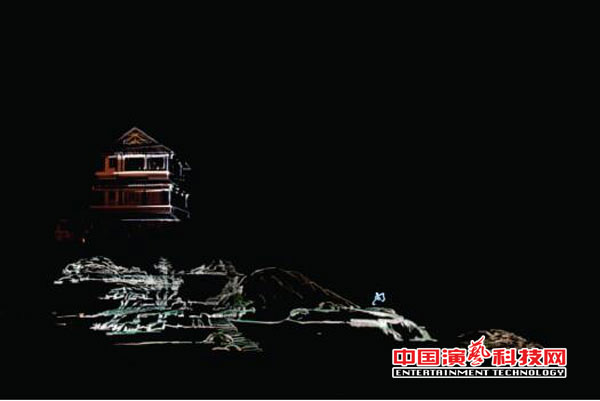 Figure 11 "Impression Dahongpao": digital lights in the housing and hillside to form the effect of ink painting