In recent years, with the rapid development of radio and television technology, especially digital, network, high-definition television production technology gradually mature, the domestic radio and television industry studio construction needs. And a period of time, the domestic studio acoustic design in the state without evidence. All kinds of studio acoustics design uneven, and some studios are often only focus on the appearance of decoration, while ignoring the internal decoration of the building on the impact of acoustic effects; some studio although considering the acoustic effect, it is difficult to adapt to the continuous development of radio and television Program on the environment, technology and other further needs.
In order to make the radio and television industry healthy development, guide the studio construction, the state has introduced a series of standards, norms. Among them, the radio and television industry recommended standard GY / T 5086-2012 "radio and television recording (broadcast) studio, studio acoustic design specifications", regulate the studio construction of some acoustic technical problems. According to the design practice in recent years, the author puts forward some problems in the design of the studio, and sums up some concrete experiences of the application specification.
1 reverberation time
Due to the content of various programs, the scale of the scenery, the number of participants, etc., the studios acoustic environment generally changes greatly, and because of the characteristics of the recording process, so relatively speaking, the studio reverberation time to be shorter. According to GY / T 5086-2012 "Radio and Television recording (studio) studio, studio acoustics design specifications", studio reverberation time recommended in Figure 2.

Figure 2 The relationship between the recommended range of the reverberation time (500 Hz) and the volume of the studio
2 sound defect
The interior of the studio is often easy to cause sound quality defects. For example, the virtual studio of the blue box, due to the use of the entire surface of the reflector, the recording area of the sound quality is almost unacceptable, therefore, should be taken to change the shape of the blue box, as far as possible to avoid the reflection of the parallel plane to the impact of sound. Some special studio, the visual effects of the dance have special requirements, the need to use LED screen or acrylic backplane, etc., if you need to layout in the recording area around, it should be carefully considered.
Sometimes, in order to program the production needs of the building using a circular flat body of the studio, then pay special attention to such studio sound focus phenomenon. As the performance area in the circular plane of the central part of the use of a significant obstacle. In order to avoid acoustic defects, the wall of the broadband strong sound absorption is very important, and in the possible conditions, it is necessary to further use the wall of the diffusion process.
3 multi-channel system
As the overall planning of the radio and television industry, the future based on the development of high-definition studio; in addition to language programs, the studio recording system should be multi-channel system design. 5.1 channel system as a multi-channel system, with its economy, scalability, compatibility and so on in the radio and television industry has been widely attention in the Olympic Games and other important occasions have been applied. 5.1-channel system compared to the stereo system contains more information, so that the sense of hearing is more "real", but it is not to achieve 360-degree all-round sound playback, so there is a further development of space technology. In the acoustic field, the sound field performance should be good in the recording area, in order to meet the requirements of the reverberation time, in order to meet the requirements Microphone layout and post-processing needs.
4 tuner
Tuning room as a studio supporting room, is an integral part of the studio, can also be called "studio", a special acoustic requirements.
First of all, in the building, due to the requirements of multi-channel playback, tuning room size design for the left and right symmetry form. Second, the volume of the tuning room is generally about 200 m3, because the low frequency sound wavelength is often longer than or equivalent to the size of the room, easy to appear in the room part of the low frequency part of the phenomenon. Under such conditions, to ensure that the positioning of the image, the sound quality is very important, so pay attention to the low frequency part of the sound absorption. In addition, for such a volume of the room, its acoustic performance is mainly by the direct sound within 30 ms after the reflection of the sound determined. The strong reflection in 15 ms ~ 20 ms is related to the phenomenon of sound staining. To this end, the tuning room of the acoustic design of the recommended practice is: in principle, should be used in front of the sound absorption, rear diffusion, reflection way.
In the center frequency of 200 Hz to 4 kHz, the reverberation time average Tm of the mixing room is:

Where V is the volume of the room, in m3; V0 is the reference volume, 100 m3. In the frequency range of 63 Hz to 8 kHz, the permissible value of the reverberation time of the mixing chamber should be within the range shown in Fig. 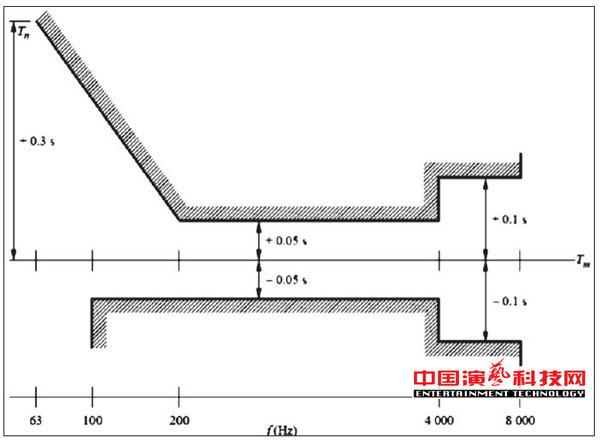