The Principle and Design of Music and Stage Lighting Interconnection System 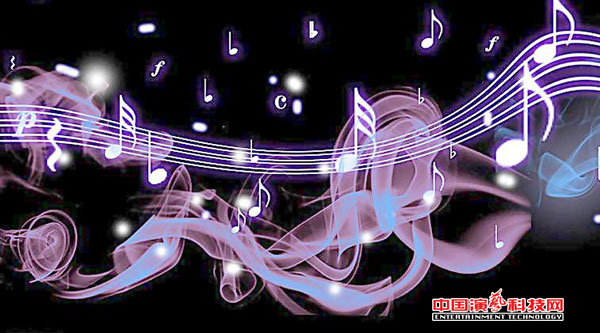 Music is auditory art, color is the visual art, the two act on different senses, but it will have an impact on peoples psychology. People have been feeling the sound and light there is a delicate connection, from the artist to the scientists, are carrying out a variety of exploration. From the physical properties of sound and light, the author analyzes the connection between them and explores the design scheme of music and optical interconnection system under the existing technical conditions, and analyzes the principle and merits of the scheme.
Design Idea of Music and Optical Interconnection System
Han Baoqiang in 2002, "on the" sound of the nature of the discussion, "the article has pointed out that the sound from the object of vibration, and the nature of light is a wave, the difference is that the light is electromagnetic waves, and the sound is mechanical waves; Wave ", and music is part of the scope of the sound under a large range, then, music and light in the" wave "level has many common nature.
Music, you can quantify the dimensions are:
(1) the pitch of a sound, which corresponds to the physical attribute is the frequency of wave vibration; (2) the sound of a tone, the physical properties of the tone of the sound; (3) a sound of the sound, its physical properties For the loudness; (4) the length of a sound, the physical properties of the length of time. The above is the music of the four elements of the psychological attributes and physical attributes. (5) a chord, its essence can also be seen as a superposition of different frequencies, or a combination of different sounds corresponding to the spectrum; (6) a piece of music speed, it is a time-related quantitative (7) tone, tone, etc., may correspond to an ordered arrangement of a particular pitch. In contrast, the optical dimension can have a light intensity, frequency, spectrum, pulse width, etc., and in the description of color and color (hue), saturation (purity), brightness and so on. In the following, the author introduces the principle and method of the design of music and optical interconnection system with the volume and timbre and light intensity and color mapping. 2 music and optical interconnection system principles and design Music and optical interconnection system design principles shown in Figure 1. The computer software is responsible for the sound signal processing, the volume, sound and other information through the serial port real-time transmission to the hardware control device, through the control of the microprocessor in the control of different colors LED lights for real-time changes in light and light to achieve lighting and music The The software chooses the interactive programming language and Max / MSP development environment specifically for audio and media production. The microprocessor chooses the Arduino series of processors developed by the Italian manufacturer. The LED lights choose the RGB three-color adjustable color LED module. The choice of such hardware and software development platform, because they are relatively pure hardware design, with higher design flexibility, in the international community has been widely recognized by engineers and artists, now has a mature network technology to share the community , Its open source features to facilitate users to more quickly grasp and secondary development.

Figure 1, the principle of music and optical interconnection system Max / MSP and Arduino between the serial communication, Wuhan Academy of Music Sun Xiao in "based on Arduino and Max / MSP" A series of "interactive device design and implementation" Detailed discussion, in addition Arduinos official community is also very easy to find relevant tutorials. 2.1 light intensity and color control principle 2.1.1 light intensity principle PWM (Pulse Width Modulation) is the full name of the pulse width modulation, it is the use of digital output of the microprocessor to control the analog circuit is a very effective technology, Widely used in measurement, communication, power control and other fields. The working principle is to control the output level by adjusting the duty cycle of the high frequency rectangular wave (that is, the time ratio of the high level in one cycle), so as to realize the control of the output level. Good, good reliability. In general, the microprocessor output of the digital signal can only be 1 or 0 two values, that is, or through, control LED lights show the light or not bright; However, if you want the LED light intensity between the brightest And not between the bright and adjustable, then the PWM this modulation on the wayProvided the possibility. Figure 2 for the cycle of 1 s, duty cycle were 20%, 50%, 80% of the rectangular wave.

Figure 2 different duty cycle rectangular wave microcontroller PWM port output frequency is generally below the order of milliseconds, the human eye due to the visual retention effect, can not tell such a short period of time through and off, so look To the light will be between a brightest and darkest between the middle of the brightness, is a result of the brain after treatment. When the duty cycle is 0, the LED is always in the unconnected state, so the light does not shine; duty gradually increased, a cycle of time to gradually increase, the human eye actually see the brightness is more and more Bright; when the duty cycle becomes 100%, LED lights in a cycle fully connected, that is, the brightest. It is important to note that computers and processors can process data quickly, for example, on a microprocessor that lasts only 0.1 s on a microprocessor that may have been running for hundreds or even thousands of cycles (depending on the processors specific port output Frequency), so the brightness of the LED lights can make real-time response to the volume of the sound. Since the propagation speed of the light is 30 × 104 km / s, the propagation speed of the sound is 340 m / s, and because of the Hess effect of the human ear, it is possible to distinguish the sound with a time difference exceeding 50 ms (17 m) Light source within 17 m of the audience area, people hear the sound and see the light is the same, and more than 17 m of the area, people first see the light, after hearing the sound. In order to make people feel that sound and light at the same time, the need for PWM pulse for the appropriate delay. 2.1.2 color principle RGB color model is widely used in various types of electronic display color model, its principle is the use of red, green, blue three different colors get different colors, popular, green and blue When the ratio is 1: 1: 1, white light can be obtained. By chooseing different PWM duty cycles and controlling their ratio to 1: 1: 1, white light of different brightness can be obtained. Similarly, by adjusting the ratio of red, green and blue and its duty cycle, you can get any color in the RGB color model to achieve color and brightness control. 2.2 system design to consider the system according to different conditions and uses, can be divided into active systems and passive system design. (1) active system: the music part of the system by the creator in advance or on-site (creative) to complete, the music signal on the one hand to the speaker to play, on the one hand the processed signal to the microprocessor, real-time control of light intensity and The color changes. (2) passive system: music through the traditional way out of the system, the system uses the microphone to pick up the sound, the use of Max / MSP signal processing analysis to get the volume and tone information, the information sent to the microprocessor, control light changes The The two systems have their own advantages and disadvantages, the stability of the active system is relatively high, and easier to achieve; passive system allows music to play in the existing way, so the application of a wider range, but it is on the scene sound effects and The quality of the pickup device is relatively large, so the stability is relatively poor. In addition, the results of the passive system implementation and signal processing algorithms used are closely related, the effect also depends on the field of signal processing results.