Control the noise of the studio 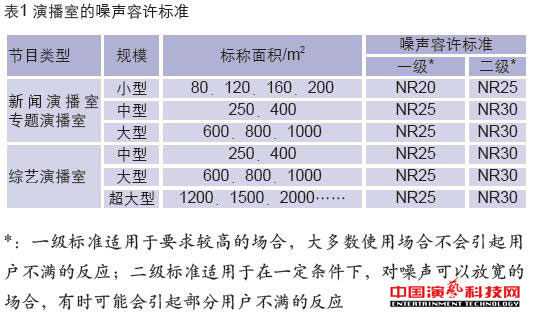 From the development of broadcast technology, the studio for the control of noise requirements are increasingly high trend, because the studio itself, the noise level is reduced. For example, in the past, the analog-to-noise ratio of the two-track recorder was around 70 dB, and the signal-to-noise ratio of the analog multi-track recorder was around 65 dB. Now, the digital recorder has a signal to noise ratio of 95 dB or more. In short, the sound recording of the studio, the studio noise is more likely to enter the program. In fact, in the early monophonic recording period, many of the noise in the studio seemed to be overlooked due to the low signal-to-noise ratio of the analogue device itself under the noise floor of the equipment. In the 1990s, there was a "de-noising" device that had been discovered in order to restore some valuable traditional tapes and to use the "de-noising" device for processing and found that random noise in the program was eliminated, The process of masked noise, such as the performance of the persons breathing, and even gently cough sound are restored to the prototype.
In the design work, you can often hear such a voice, "the studio noise standards can not be so high, not open the door can record it?" However, more sound engineer is not the noise problem set aside. Since the impact of noise on the quality of the program is increasing as the signal-to-noise ratio of radio and television equipment continues to increase, it is necessary to maintain the allowable noise standard of the studio. Therefore, some demanding sound engineer in the studio acceptance, the recording equipment on the normal working position, asked to hear the noise before they give up.
In recent years, the noise control of building technology has made significant progress, but also more popular. So, in the architectural design, as long as serious treatment, fully capable of the studio noise control done better. The noise sources in the studio include equipment noise, lamp noise, noise in the air conditioning system, and other extraneous noise, such as program crosstalk, floor crash, traffic noise, and so on, which are in normal working conditions in the studio. These noise can be divided into two categories: continuous steady-state noise and unsteady noise. In the specification is the allowable criterion for continuous steady state noise.
In the specification, there is no clear noise tolerance for non-steady-state noise. This is not to say that unsteady noise is not important, but it is not yet possible to develop uniform standards for unsteady noise at present. In practice, there is such an experience, when under certain background noise conditions, the non-steady-state noise even below or with the steady-state noise, or can be perceived. Therefore, the design should still pay attention to the impact of non-steady-state noise, there are more stringent noise than the steady-state noise standards, and take the necessary control measures.
For the interstices between different studs, according to the masking effect of the auditory, the allowable values of unsteady noises such as program crosstalk can be calculated for different NR noise curves. The masking effect is a phenomenon in which the frequency of the sound hinders the auditory system from experiencing another frequency of sound. In general, the low frequency should be 6 dB lower than the simultaneous steady-state noise, and the middle and high frequencies should be about 10 dB lower. On the studio equipment noise, should pay attention to the recent widespread use of LED lighting noise. LED noise has improved year by year, but not entirely satisfactory. So the design should be used as far as possible the use of low-noise lamps, or take the necessary sound insulation measures.
The main technical measures of sound insulation
Broadcasting center is generally built in the traffic developed areas, as in recent years, the scale of radio and television center is growing, functional space and noise sources to truly "trouble quiet" has become increasingly difficult. In the overall layout of the layout, basically follow the main building plus podium layout, the podium part of the main set up some large studio, the main building is arranged according to different functions of other technical rooms. Even so, there are still a lot of technical rooms such as news studio, live room and air conditioning room and other noise sources with the first floor, the interference of each other is very grim situation. External traffic noise such as light rail, subway and other interference also mentioned the agenda up. Here are some of the commonly used sound insulation measures to note the point of action.
2.1 Lightweight wall
Due to the high-rise building load requirements, high-level partition with light structure is imperative. On the light structure of the wall of the sound insulation, we must first eliminate a misunderstanding, that is, according to the light structure of a single wall of the wall, such as Rw (weighted sound insulation) or STC (sound loss level) to choose the light structure of the wall. Among them, according to the general theory of light structure wall, double layer light structure wall resonant frequency:

m1, m2 is the unit density of the material, l is the structural thickness, c is the speed of sound. In theory, when the vertical incidence, the resonant frequency above the light structure of the wall of the sound insulation performance of 12 dB (octave) rise, taking into account the actual installation of light structure wall rigid connection (acoustic bridge), etc. Only 8 dB to 10 dB (octave) rise. In addition to consider the effect of anastomosis, the effect of anastomosis is due to the angle of sound caused by the sound waves and the wall in the bending wave propagation velocity coincides with the phenomenon of reduced sound insulation. In general, the frequency of anastomosis is about 2,500 Hz, and the frequency of the light structure wall is in the middle frequency range of 500 Hz to 1 000 Hz. In order to improve the sound insulation performance of the light structure wall, it is necessary to increase the thickness of the structure as much as possible, the internal filling of glass wool and the use of damping composite plate instead of single layer homogeneous material, and the use of floating structure, under the premise of good design, It is possible to reach a sound level of 70 dB or more. In addition, the installation of lightweight construction walls should pay attention to the construction quality, duct wall, socket box and other installation parts should be strict sound insulation measures to ensure that the original sound insulation performance.
2.2 floating floor
With the intensive construction of the studio, the studio in the upper and lower levels of the adjacent relationship is difficult to avoid. At this time, the floor of the studio should be floating floor for sound insulation, vibration isolation, to ensure that the upper studio normal activities do not affect the use of the lower studio. The basic structure of the floating floor system is shown in Fig. Floating floor is to prevent the impact of a positive sound insulation, vibration isolation measures in the studio design has a wide range of applications. At present, often used vibration isolation materials are high-density glass wool board or vibration block, rubber or polyester vibration pad and cork and so on. 50 mm × 50 mm × 50 mm high density glass wool vibration isolation block because of its resonant frequency can be designed to about 10 Hz, vibration isolation effect is better, stable performance, etc., to be more widely used. 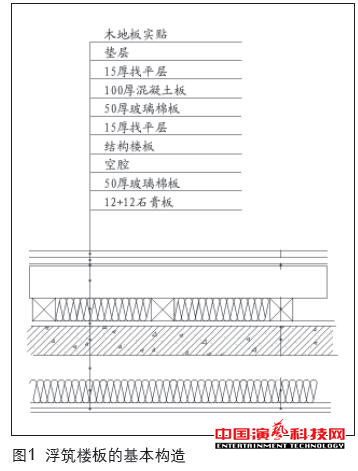 3.3 muffler and pipe parts of the chooseion, processing
In the silencer design, a small muffler with a small drag coefficient and a pipe part (such as a tee, elbow, reducer and tuyere) should be chooseed. In consideration of the loss of resistance, different mufflers should be used in combination. In addition, the chooseion of the muffler, but also according to the equipment of the sound power level and studio allowable noise standards, taking into account the natural sound attenuation of the pipeline. The general chip muffler, on the high frequency of the muffler is better; in the arm muffler elbow in the low frequency has a better muffler performance. Reasonable to set the direction of the pipeline, but also need to minimize the muffler, air conditioning components such as valves and other access to the secondary air generated by the impact of noise.

Previous： The Effect of Musical Emotional Perception on Reverberation