Do you know how many steps and steps a stage lamp can go from the factory to the stage? You can know a stage lamp behind the number of technical support, in order to create the stage of the ever-changing, colorful or beautiful or cool stage effect?
Let us take a look at this stage of the important supporting role, the light of the eyes of the only protagonist is born how. In the case of
Step one: lamp board welding

The picture shows: manual patch. The workers are now working on the white light beads are hand welded to the light board. 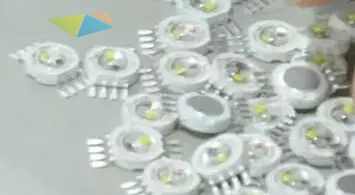 The picture shows: white this small component is the light-emitting diode light source. A lamp bead has four chips, red, green and blue

The picture shows: now six-color lamp beads chip is also more common, in addition to red, green and blue and yellow and purple line.
Before 2008, each LED lamp beads only one color, the need to combine different colors on the need for several different colors of light beads for mixed light.

The picture above: on the tin

The picture shows: light board in the welding LED lamp beads need to be affixed to the machine before the bonding plate and LED lamp beads material: tin
Step two: semi-automatic patch

The picture shows: semi-automatic patch production line
Hand-welded lamp board to go through the high temperature of this machine temper, welding up the lamp beads can be firmly attached to the board in the light board. The middle of the temperature will gradually rise from 140 ℃ to 180 ℃, just in the tin part of the tin will all melt, lamp beads and light board on the close together.

The picture above shows: remove the light board

The picture above shows: cooling
After baking the machine, take out the lamp board temperature will be high, need to be placed under the cooling tube cooling. After cooling the light board even semi-finished products, and can be loaded into the turnover box, into the assembly line for assembly.
Step 3: Assemble the "lights of the brain"

The picture above shows: IC
The neat rows on the left are the CPUs that control the stage lights and are installed on the motherboard of Figure 12, and all the signals are collected here. 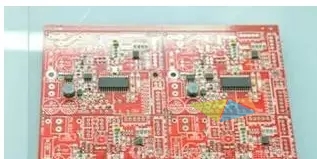 The picture shows: motherboard CPU
The secret of the stage lights are hidden on these chips.

The picture above shows: drive
And then through this piece of green chip, control lamp beads. The name of this green chip specification should be called "drive", through which you can control all the current through the lamp beads, and then control the lamp beads. Popular terms, CPU is the top of the pyramid, the middle management is driven, the lamp beads is the bottom of the people.

The picture shows: automatic patch, close-up
The reason to come up to see these finished products, because the driver and the motherboard components are completed through the automatic placement machine. Workers only need to put the material on the automatic placement machine, set the location of components, the machine will be able to automatically complete the work. Most of the electronic components can be completed by this automatic placement machine, in addition to some large plug-ins. In the case of
Step four: detection
Detection is a very critical part of a link. Each board: motherboard, display board, constant current plate are required to undergo a rigorous testing to enter the next step in the assembly process, it can ensure that the assembly circuit board is a good function, no defects, and thus effectively ensure that the finished product failure rate.

The picture above shows: detection amplification
Connected to the switching power supply, first look at the light does not shine.

The picture above shows the display contrast
Now is to adjust the contrast of the display, and check whether the screen is working properly, the menu is complete.

The picture above shows: the console
Through the console to adjust to the motherboard signal, you can control the light is not bright. This test with a small console, the actual stage with a large console than the control of the circuit to be much more. In the case of
Step 5: Assemble
A complete stage lamp is actually composed of light bulb, light source (that is, just look at the light board), motherboard, drive, lens, power several parts. 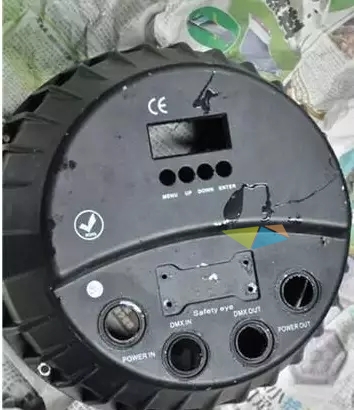 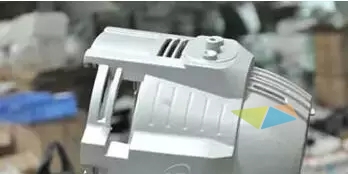 The picture above shows: light body
Die cast aluminum cast lamp body. Generally see the lights are this part. Do not look this is just a metal shell, it seems no technical content, in fact, this involves the body of the cooling, cooling technology will directly affect the life of the lamp.

The picture shows the patent shell
This is their own design of the pumpkin-shaped lamp body shell, has applied for a patent. This lamp has a feature, the middle of a surface, the heat lead to the shell. 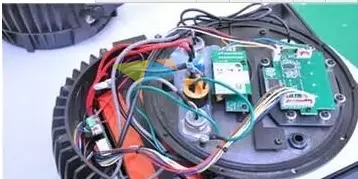 The picture shows: molding
Assembly procedures are very complex, there are strict steps, do not follow the steps to install the plug does not go. Moving head light is more complex, the wrong step to be repeated, and even left and right can not be installed wrong. In the case of
This is a basic assembly of the stage lights. This lamp comes with a battery inside, do not plug the power can be used. This is for some stage equipment rental business, simply as if God helped. Because some temporary venues simply can not find the right power. 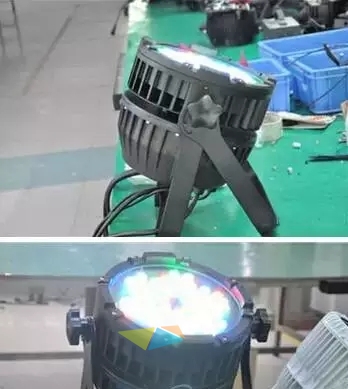 The picture above shows the limit test
Bad test. Test to assume that customers can use the worst case, all the values are transferred to the limit, switch the fastest, the power to the full full To the brightest, but also to flash the fastest. If in the middle state, the test does not make sense.

If it is outdoor lights, but also need to go through the spray test.
Conclusion: Kung fu outside the process
These processes seem simple, but the real effort is outside the process. A stage lamp involves the core technology: mixed-light technology, signal transmission technology, control technology, have not been able to show up in the process. In the case of
The same appearance of a stage lamp, after a different software design, internal programming, out of the effect can vary widely. With a word to sum up is: the lamp is dead, the design is alive. There are thousands of light, the designers ideas may have tens of thousands, hundreds of millions.

Previous： LED display and stage lighting side by side what role