3D is a popular term in recent years to 3D movies, 3D TV, 3D games, 3D projection, as the representative of the 3D imaging technology has become a hot topic in the field of video. And audio, 3D sound (also known as immersion sound) is becoming a new direction of development. Over the past two years, the audio field of important international conferences, such as AES (Audio EngineerSociety) meeting, the German sound engineer meeting (Tonmeistertaguang), will be 3D voice as an important topic of discussion; national research institutions and equipment manufacturers are also focused on research and development New technology for 3D sound, new equipment. The author starts with the basic concepts and characteristics of 3D sound, introduces a series of common 3D sound technology solutions, and summarizes the 3D sound recording methods for music programs.
Characteristics and Development of 13D Sound Technology
3D (3-dimensional), usually translated into three-dimensional, usually refers to the spatial dimension, that is, with long, wide, high three vector three-dimensional space. 3D sound can be understood as a certain technical means to record and reproduce the sound of three-dimensional information.
The human ear has the ability to perceive the three-dimensional sound field and locate the three-dimensional spatial image. Sound recording and playback technology from monaural, two-channel flat stereo to 5.1,7.1 plane surround sound, its sound field shaping ability from one-dimensional space to the development of horizontal two-dimensional space. The 3D sound technology and 3D graphics technology is mainly different in depth, mainly to expand the audio system in the vertical direction of the sound field shaping ability, you can simulate the real listening experience with the most close to the three-dimensional sound space.
1.1 3D sound technology features
3D sound technology and the use of equipment, not only to bring people a new sound aesthetic experience, and because of the sound space expansion, sound creation space and freedom to obtain an unprecedented improvement. Its characteristics and advantages can be summarized as the following points.
(1) 3D sound technology presence and deep sense of immersion. In peoples listening habits, sounds from above and obliquely above are carrying more information that helps identify the sound field. 3D sound playback technology allows the audience to be in a three-dimensional voice playback space, the sound field to reproduce and listen to the natural environment close to the experience, this telepresence is flat and surround sound can not match.
(2) 3D sound technology to expand the vertical direction of the sound image positioning to make the sound field information more complete. The appearance of the vertical direction of the sound image positioning so that the sound movement trajectory is more free, coherent, and further enriched the artistic expression of the sound.
(3) 3D sound technology improves the sound quality of playback sound. From the mono to the plane of the development process can be seen, the less the number of channels, a single channel contains more information on the sound, it is prone to the signal between the sound and phase offset of the phenomenon. At present, most of the common 3D sound system has increased the top or oblique above the speaker, so to a certain extent, ease the sound dyeing and phase offset problem. The double-blind sound quality comparison test results of the Fraunhofer Institute in Germany (see Figure 1) also show that the overall sound quality of the sound is greatly improved when the extra channel speakers are added. 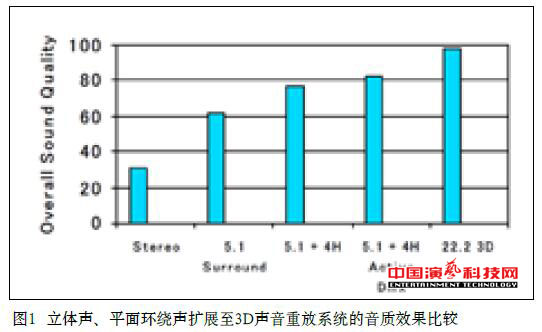 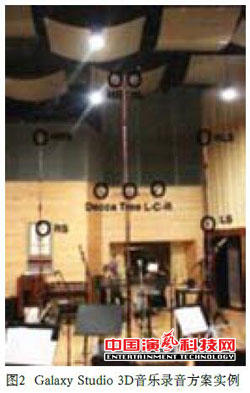 One of the advantages of this solution is that the backward compatibility of the plane surround system is excellent. In the absence of decoding, the system recorded the signal to reproduce the lower standard 5.1 surround sound recording system signal; and the upper microphone is mainly responsible for picking from the top of the hall, obliquely above the reflection of the sound, but also pick up some of the energy relative The lower layer is weaker and the sound is longer. 2.2.2 2L record company recording program Norway 2L record company (LindbergLyd) is a classical music record label in the rising star, nearly two years of its record won the Grammy Award for classical music category of a number of nominations. It is currently insisting on using DSD recording technology for recording, is currently a small number of Auro-3D format Blu-ray disc record company. In addition, 2L has a distinctive audio aesthetic concept, that multi-channel technology can break the original stage performance audience and performers between the traditional location relationship, so the production of a large number of records is the pursuit of a list of the audience The middle of the band, the audience is surrounded by all the music of the novel sound experience. The author summarizes the basic principles of 2L recording as follows: Choose the best recording site, use the most simple microphone settings, by changing the band to get the ideal balance and wonderful sound experience. 2 Ls pick-up technology draws some inspiration from DeccaTree and Mercury Tree, and its 3D pickup technology is evolving from other planar surround sound pickup technologies. Its flat surround sound pickup technology generally uses 5 or 7 microphones consisting of a pickup array. To the album "Remote Galaxy" (Figure 3) recording, for example, the plane surround sound recording, using seven microphones composed of surround sound array placed in the ring layout of the band center, as shown in Figure 4, the use of microphones are generally For the DPA all pointing to the microphone, the adjacent microphone spacing of not more than 1 m. The array of five microphones is understood to mimic the L, C, R, Ls, and Rs 5 speakers of the 5.1 playback system; and the array of 7 microphones is developed from five microphone arrays with two additional microphones located L and Ls, R and Rs, to ensure that the L, R and Ls, Rs between the sound transition is balanced, natural, mostly used for large band pickup. On this basis, 2L company to increase the top of the four full-pointing microphone to achieve Auro 3D format recording, these four microphones are located in the L, R, Ls and Rs channel microphone is just above the downward angle slightly less than Lower microphone, the height of the upper layer is equal to the lower L, R microphone spacing, as shown in Figure 5, the recording microphone array and the location of the band shown in Figure 6. The upper and lower layers of the microphone basically consist of a cube, and the size of the cube varies according to the size of the band between 120 cm and 40 cm [6]. Microphone, the 2L recording more choice all point to the microphone, but sometimeAccording to the characteristics of the music and the device in the small diaphragm microphone DPA4003 and large diaphragm microphonesDPA4041(The adjustment of the direction of the microphone spindle is more stringent)。 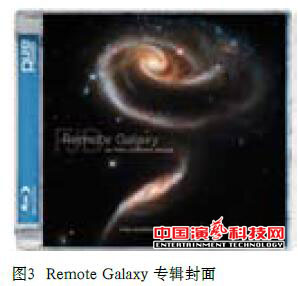 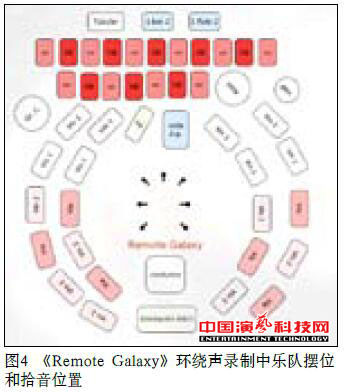 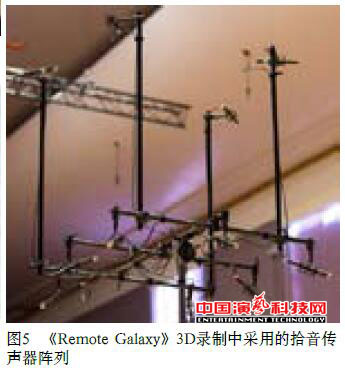 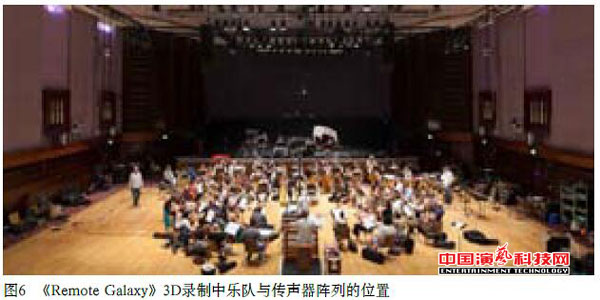 And Galaxy Studio recording program, 2Ls 3D music program pickup technology from its flat surround sound array technology, which also has the perfect backward compatibility. According to the 2L companys audio aesthetic principle, the systems microphone is very economical to use, in addition to the main microphone array almost no use of any auxiliary microphone (only occasionally to the solo instrument set up auxiliary microphone), so this recording on the hall acoustic environment, the band The location of the layout and the band itself has a very stringent sound balance requirements. 2.2.3 Zielinsky Cube 3D pickup program Zielinsky Cube is a famous German sound engineer and producer Gregor Zielinsky named 3D music recording system. In 1989, Gregor Zielinsky won the Grammy Best Classical Music Record by virtue of recording the musical "honest man" directed by Bernstein. He started in 2010 from Galaxy Studios Auro 3D research and development work, a lot of music 3D recording and production experiments, music types cover classical music, jazz, rock and other music styles. After years of 3D music recording practice, Zielinsky summed up a unique set of 3D main microphone pickup layout, called Zielinsky Cube. The system consists of eight microphones, the microphone position is just in a virtual cube (rectangular) of the eight vertex, as shown in Figure 7, Figure 8. As shown in Fig. 7, the distance between the lower L and R microphones is approximately twice the distance between the upper layer HL and the lower layer L, and the height of the remaining upper microphone can be pushed in such a way that the microphone layout is the same as that of the Auro 3D system Complete match. The lower L, R and LS, RS microphone group can be understood as the conventional large AB plus left rear right rear two surround sound microphone, L and R microphone spacing is generally between 1.5 m ~ 2 m, sometimes even larger, microphone Models are chooseed by Sennheisers MKH800twin (see Figure 9). In the case of 3D recording, when the conditions permit, the upper and lower 8 microphones use the model microphone, and sometimes the upper layer also has the choice of other heart-shaped or wide-minded to the microphone. HL, HR The microphone spindle is pointing in front, andHLS 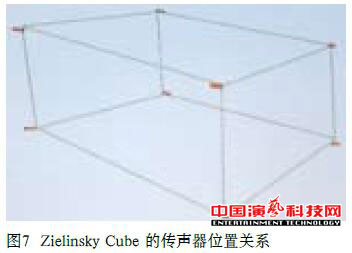 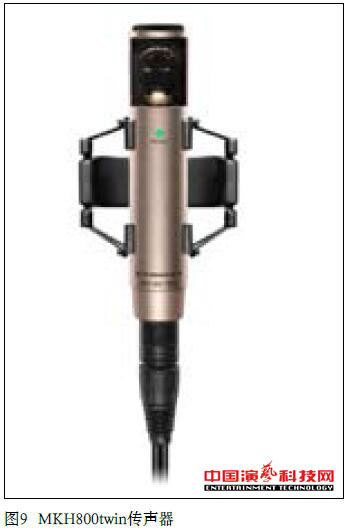 And HRS microphone are more pointed to the top of the ramp. 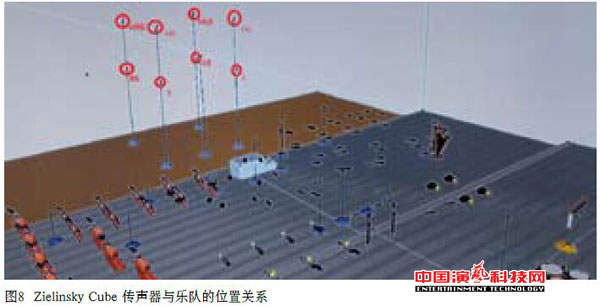 According to the above-mentioned microphone layout scheme, Zielinsky generally does not use the front intermediate channel of the Auro 3D system. He thinks that the use of the intermediate speakers does not play an important role in music recording, and it will make the transition from left to right natural. Even if a central microphone C is added to the middle of the left and right microphones according to the band preparation and hall features, only the signal is assigned to the left and right speakers at the same time as the center speaker. At the same time, Zielinsky also raised the upper and lower layers of the microphone to pick up the signal correlation problem, he thinks the upper and lower layers of the microphone to pick up the signal content must have a certain relevance, that is, the upper microphone also pick up a certain amount of sound source direct sound, only So as to ensure that the vertical reproduction of the sound field is the most natural, and can reflect the height of the sound source itself. If the upper microphone only pick up the top of the reflected sound, will lead to the entire sound field is divided into two parts, so that the sound field integrity, poor integration.

Previous： What are the typical electro-acoustic variable reverberation systems